Beyond the viewfinder - Ironman Langkawi

My trip to Langkawi was to serve several purpose. They are a) to recce the Langkawi Ironman route to see whether is it doable from my standpoint, b) to provide bike support mechanic, c) to be supplementary photographer and d) to provide emotional support to comrades doing the ironman.

Typical of me, the journey was full of preparation.

I had prepared a toolbox complete for a full bike support with pump, pit stops and even a first aid kit. I had also shipped extra one pair of wheelset being the paranoid person I am. I was extremely happy that this wheel was made to good use by a close fren of mine.

In becoming the Bike Support Crew, I had planned my route in an anti clockwise direction against the ironman cycling so that I can see quickly whether they had needed help. At roughly about 4 pm, we made our last round on the bike route to ensure familiar faces were finishing the last route before we drove back to the Transition.

Having been away from photography for the last 25 years, the world of DSLR takes a bit of getting used to. AJ was kind enough to loan me his wonderful SONY for me to use on that day and I had a blast using his camera. Having very little talent with photography, i had to leverage more on preparation.

Upon arrival in Langkawi on wednesday, Arif was kind enough to take me along for a full recce on the bike route. I noted some vantage points and some stopping point for me to take photograph from. Being the paranoid I am, I took the car out for another spin to familiarize the route the following day while supporting the Ironman on their warm up bike practice. Although majority of them got lost on their bike, i still manage to take preliminary photos with my compact as part of the documentation of their journey to the Ironman. 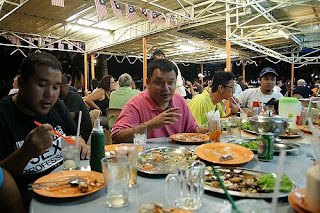 When our head cameraman came, I took the team again on the route (after bike checkin) to finalize the distribution of work and our camera stations. The team which comprises of Shazly, Jim, Luvis, Jason, Mervyn, Fatini, Aini, TSB , Hafiz and myself must have been the biggest camera crew on Langkawi. Having known that we will have an early start on Saturday, most of us took our dinner early and had an early nite. 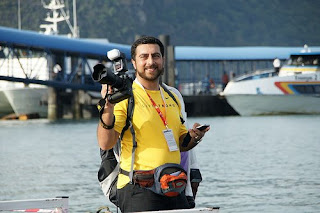 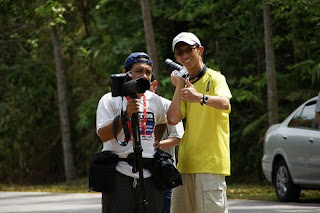 Race Day preparation was frantic for me. After waking up at 4.00 am, we had breakfast and i drop of the Ironman to their race start station and went back to Bayview to pick three other camera crew (chick crew). Our first assignment is the Pre Race and the swim. At the swim, we work as a team to document every angle of our Ironman comrades. Jason was the lookout, shouting the numbers and identifying the swimmers, Shazly was on the pontoon for frontal shots, I was covering the approach, Fatini was covering the showers, Jim was roaming around doing what he does best - expressions. 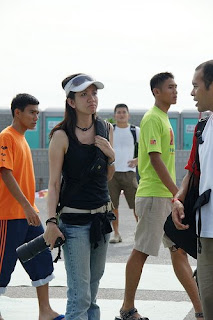 We later rushed to the bike route. Shazly and Jason was on scooters, some of the team were on the Innova and some were with me. First stop for bike was the bus stop at Padang Mat sirat (before the airport) and subsequently the last hill at Bukit Malut. 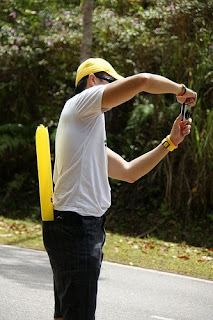 Though we had planned our logistics reasonably well, we had overlooked some of the road blockages and the jam that the Ironman had caused the Kuah town. We got stuck in Kuah town for nearly 45 minutes before deciding to park at Bay view hotel and walked to Istana Condo to cover the run leg.

As the nite came, Tini, Aini, Lin and I decided to move on to Jetty point to cover the finishing. We had anticipated some of our colleagues will be coming in at about 8:30 pm. We sat down for a quick dinner at the Jetty point stall for laksa and coconut water knowing that we will be having a long nite until 2 am on sunday morning. 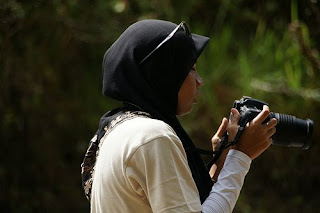 While waiting for dinner to come, i received disturbing call from Patrick to say that Maysenn had required medication and pain killer. Maysen at that time was Istana Condo when she met Patrick and asked me to be at Seaview Hotel so that she can take the medication. Since the road was jammed, i decided to leave the rest of the crew and chose to take the first aid and ran to Sea View and met her just in time. Deciding to stay on until i can see her coming back in the next loop, i took my rest near the TomYam stall with TSB and team.

After seeing that Maysenn had recovered and knowing that AJ was in the last loop, I ran back to Jetty Point to cover the end at the Finishing Ramp. We finished the nite at about 2:30 am after sending Aini and Tini back to the hotel. I also wonder how I survived the 22 hours.

The way I looked at it, Ironman is majority part preparation and training, most part being there and finishing the event and some parts having the mental determinition to finish. I hope i can play some role in helping out comrades finishing the race although deep in my heart, i know the determinition has to come from the ironman himself/herself.

But in summary, it was a good learning experience for me. But, I had to aggree with ariff, the takeaway is that I had with all my colleagues and comrades is the friendship and the spirit of camradare of just being there to saviour the moment. The rest is the job, be it as participant, as a camera crew, as a spectator. I had lots of good memories.....
Posted by The Editor at 8:19 AM 8 comments: