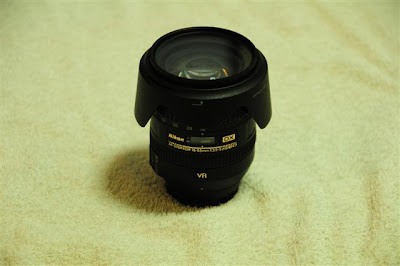 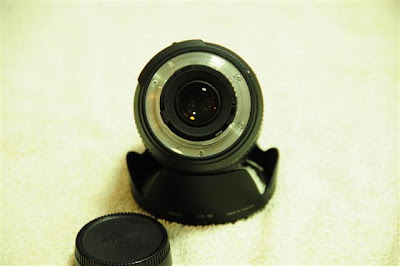 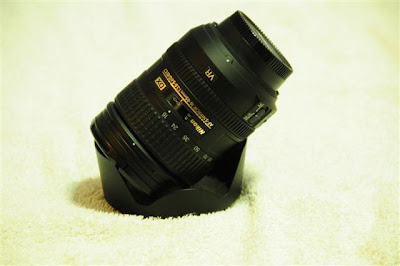 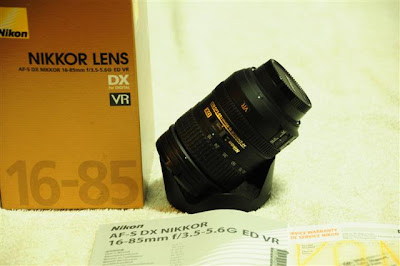 I was given to test the Lowepro Shoulder Camera Bag to use it for the Energizer Night Race. This writeup is to give it some perspective of the bag.

Outlook & Finishing
The bag is finished in Black externally and lined with Lime green fabric on the inside. The contrast is quite interesting. Surprisingly though, the bag does not have that much padding as the usual Lowepro standards. This lack of padding is perhaps to keep it light and easy to use. Access to the internal compartment is via a flip cover and two buckle. Comments i received from some girls are that they like the color scheme. I am ok with the color scheme though some of my guy frens thought its too "girly". 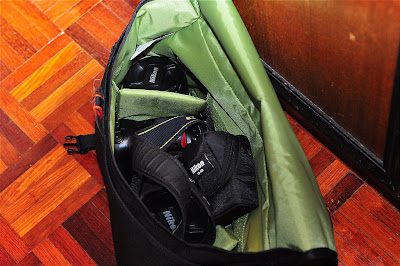 Internally, you have one big compartment with velcro on the sides for you to place two separators. Using the separators, u can divide that compartment into three distinct areas to place camera body, lens and flash. 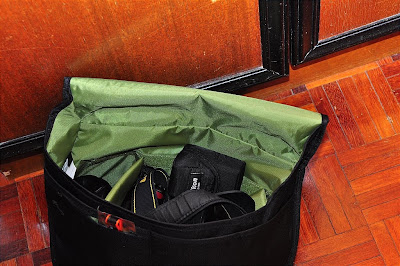 I have tried to put my Nikon D40 with battery grip in the bag. It is a bit tough , though doable. It would be more comfortable and convienient to place the camera minus the battery grip, but i was just trying to stretch it. The other compartment, i manage to place my SB400 flash and another spare Nikon lens (18-70). The ideal configuration is perhaps a small camera with kit lens, a flash and another spare lens.

In use review
The camera bag feels comfortable in use for casual travel to carry your camera when you do a walk about. It may not be a fair to compare this bag and my usual Lowepro Flipside400, which i use regularly for sports and outdoor shoot. This shoulder bag is more suited for holidays, travelling and walk about where heavy duty equipment are not being lugged around.

I had used it for my daughters sports days and find it useful to take out and put in stuff. It has a zipp compartment for placement of lens cap and memory card (though it is clearly not identified as in other Lowepro bags). I also use it as a walk about camera bag during the energizer Nite race. I find it light and convienient and easy.

Conclusion and Summary
In summary, these are the findings:-

What it should be used for
a) Casual walk about, travel or holiday
b) Equipment list no more then 3 ie Camera, Flash and maybe another lens
c) Budget constraint and as alternative to other entry packaged bags

What it should NOT be used for
a) Heavy duty users with big lens and big camera body (inclusive of battery grip)
b) Rough use
c) If you are running around from place to place.

I presume, this bag is the entry package for Lowepro to introduce to the first time Camera user. I think its listed in Lowepro catalogue as Exchange Messenger.
Posted by The Editor at 7:46 AM 1 comment:

Things that shape my life and views (Part 1)

1969 - Hiding under the bed with my mother with a parang while riots are happening outside; hated confrontation after that

1971 - Selling nasi lemak in Iskandar school; the meaning of being humble

1974 - Learning Tae Kwan Do in YMCA Ipoh; after being extorted numerous times near St Michaels School Ipoh; learning to be self dependent

1976 - Washed away by torrent water near Tanjung Rambutan water fall; seeing the feeling of despair in my fathers eyes not being able to save me. Eventually, saved by big boulder; Fear of water and respect the power of nature

1979 - Discovering the Art of Cooking; Learning to cook and recipe of 10 ways to cook an egg for dinner (having to go overseas)

1981 - Discovering Love and patience ; meeting my future wife while giving her tution in Applied Math and Physics

1984 - Long Tired Night at Subang Airport while coming back to Malaysia, experiencing an Attempted Corruption during the Bersih Cekap Amanah campaign ; Learning the word apprehension of politican's slogan.

1987 - Going through the Economic Crisis where New Mercedes Benz were sold at half price, ATUR phones costing RM8000 were sold at 1/3rd the price to pay debts at coffee shop in Bangsar; learning the meaning of savings and debt free.

1989 - "Its better to make a decision, wrong it maybe in hindsight then not to make a decision and leave people hanging" ; Lessons in life (from my mentor Engineer) while assisting in supervising the construction of the Langkawi Jetty Complex before CHOGM.

1990 - "Doing the right things may not necessarily be right especially when done at the wrong time"; appreciating the meaning of timing and the many ways of saying "No"

1991 - Civil Engineers can design IT Network and do programming - having a degree just means you can do many wonderful things; Change in profession from Civil Engineer to IT Network Manager and Administrator

1993 - "Internet is going to be the next powerbase - here, familiarize yourself with Gopher and Mosaic" (so says Dr Mohamed Awang Lah {Father of Malaysia Internet} to some of us); first lessons on the power of the NET.

1995 - Information is power, construction of databases can be challenging when you don't have an idea of the end game ; Undertaking various IT projects while in JKR and SMPKE.

1996 - Hmmm...its quite easy to exploit this sendmail bug and stealing the /etc/passwd file - Might have a flair in Information Security ; experimenting with Security System after studying the probable method of Hack by friend Dinesh Nair.

1998 - "You may have strong opinion and want to be right all the time, but if you do that, you will be LEFT (left out of discussion)" - so says one of my mentor; lessons learn while chairing a IT Audit meeting and about negotiation.

1999 - "If you have nothing good or constructive to say, better not say anything" - while managing newsgroups in JARING ; learning the art of tact and positive enforcement.

2001 - "Some people need to be guided in the thinking process, you need to design forms for people to fill in, to start them thinking" - while doing IT Strategic Plan ; Lessons in preparation and implementation process.

2003 - "Its easy to gauge people's intelligence when they start talking and act, its when they don't say anything, then you start worrying" - while facilitating a Information Security Workshop; lessons in not talking too much.

2004 - "You cannot attain knowledge by just reading, most of the time you have to DO to expereince and understand the shortcoming" - says my ex-boss; lesson in learning and managing Technology Companies (be it in marketing on in technical)

2005 - "The difficult part is not about learning new stuff, its about unlearning all the bad habits that you already have" - says my CEO then; having been pointed out about my habit of procrastination.
Posted by The Editor at 10:57 AM No comments:

Lessons learned while waiting in the waiting room of the Operation Theater!!!

I would like to express my thanks and gratitude to all my friends who had sent me SMS and made calls to me to ask about my daughter's surgery and her condition. This posting is one of the ways that I can express my feeling of gratitude to all of you.
Posted by The Editor at 8:43 AM 2 comments: